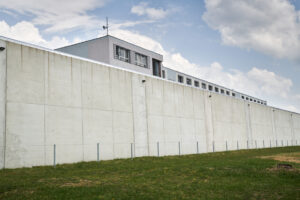 A consortium of BizGarden, Fly4Future, GINA Software, Cervi Robotics, the Military Technical Institute and the Military Research Institute are involved in its development. The consortium of companies in cooperation with the Prison Service of the Czech Republic demonstrated combining an advanced ground localization system with a flying robot. Everything is controlled and managed by artificial intelligence. The need for human intervention is minimal. The main advantage of the system is the ability to disarm an approaching flying object efficiently and in the safest possible way.

The basis of the system is a mobile hangar for drones developed by the Polish company Cervi Robotics within the AUDROS project. “Our cooperation with the European Space Agency has been ongoing since 2020, when we started developing an autonomous system with drones for the detection and elimination of CBRNe threats.” says Jan Orava, BizGarden representative. “Today, we have a hangar that keeps the drone in a charged state and enables automatic launch of the drone in a matter of seconds in case of an emergency,” adds Jan Orava.

The actual engagement begins when the Eagle drone is close enough to the intruder. At the beginning of the trapping process, a bulky trapping net is deployed. The flight of the drone is optimally planned to optimally disable the target by trapping it in the net carried in the suspension.

If Eagle or a cooperating ground-based location system detects another target, the drone can continue to pursue the first intruder in the network. Of course, if its AI assesses that this is technically (e.g. due to the size or expected weight of the second target) possible.

“At Fly4Future, we are also working on the possibility of multiple flying robots autonomously working together to capture a target or group of targets. They would be aware of each other and their movements and next steps and coordinate the intervention against the target. Artificial intelligence could thus play a similar action with a group of drones as when a pack of wolves attacks its prey,” explains Martin Saska representative of Fly4Future.

According to him, one of the biggest advantages of the introduced system is the safe disarmament of the intruder. “This is because if an intruder drone is shot down, e.g. by a shotgun or electromagnetic cannon, a disaster can occur if the drone is carrying explosives or other dangerous substances. The Eagle.One with the captured target can gently land in a safe place, which is determined in advance, for example, by bomb technicians,” adds Saska.

The system can provide invaluable services in protecting critical infrastructure. This can include nuclear power plants, prisons where drugs, mobile phones or weapons are smuggled in by drones. But it can also be involved in the protection of important people, such as presidents, celebrities and so on.

Drones are a huge security threat today. With minimal resources, it is possible to acquire a highly effective and efficient weapon that can repeatedly cause tens of millions of dollars in damage to life and property. Protecting against unwanted unmanned flying vehicles is and will be a very hot topic.